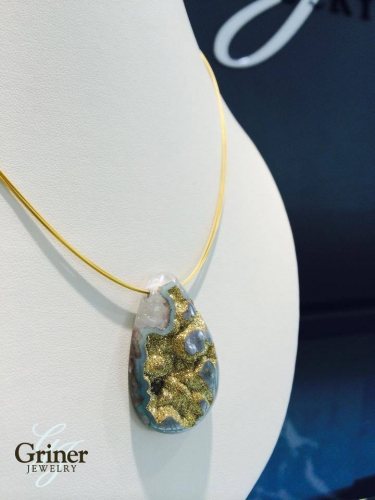 Happy birthday, October babies! Your birthstone, the opal, carries a special attribute: No two are ever alike. Formed in volcanic rock, opals are non-crystallized silica gel that has hardened over time with heat. Opals are soft stones that range in color from milky white to spectacular black opals, with some opals developing patterns of color or flashing the entire rainbow spectrum when moved. The highest value is placed on the Harlequin Opal that has pattern of red, yellow, and green, much like a clown’s costume. Australia is the prime source of opals worldwide, followed closely by Central America and the American Southwest. In 2008, NASA discovered opal deposits on the surface of Mars!

The opal was a symbol of hope in the ancient world; however, that changed in 14th century Europe during the Black Death epidemic. Opals were said to be brilliant in color when worn by a person afflicted with the Plague, but would loose their luster after the wearer’s death. A myth grew up around the opal that it would bring about death. The fact was that the opal is a soft stone that is sensitive to temperature, burning brilliant against feverish skin and then dulling again after the body cooled after death. Fortunately, the opal found favor again during Elizabethan England, and has remained a popular stone up into modern times.

Opals are often found in pendants and necklaces, although opal rings are common. Opals are much softer than diamonds and sapphires and are susceptible to damage, which is why opals are not commonly used in wedding jewelry that will be worn every day. Antique and vintage opal pieces are rare, due to the stone’s unfortunate reputation for so many centuries in Europe. However, modern expressions of opal designs are often paired with diamonds in traditional settings, and natural-looking “artisan” designs where the stone is worked as little as possible.

Griner Jewelry has a beautiful bold opal collection from the American Southwest. Mr. Griner worked closely with the designer to create an original custom collection in gold settings, matching the gold vein running through the stones. Come visit the showroom at 30 1st Ave. SE Moultrie, Georgia 31768 and see the opal collection firsthand!