Since the first histories were written, Mexico's vast mineral wealth, both real and imagined, has played a leading role in shaping Mexico as a nation. Mocteczuma offered Cortez and his fleet upon their arrival in the new World gold and silver in hopes of peace. Legends of Aztec and Mayan gold stretching back thousands of years allude to wealth untold among ancient native dynasties. European discoverers looked to Mexico as a land literally flowing with rivers of gold and silver. While gold and silver may not flow in rivers thoughout Mexico, they weren't very far off the estimations. Over 60 different types of minerals are mined in Mexico, with Mexican silver production at an estimated 1/5 to 1/3 of all silver that has been recovered from the Earth. Almost every region and state in Mexico has a precious metal or gemstone mine.

Gemstones from Mexico are not quite as varied as mineral ore, but Mexico does roduces some of the most exquisite gemstones in the world. Amyethst, which we will discuss next month as a birthstone, and topaz are the most prominant, but fire opals are the most widely recognized Mexican gemstone. 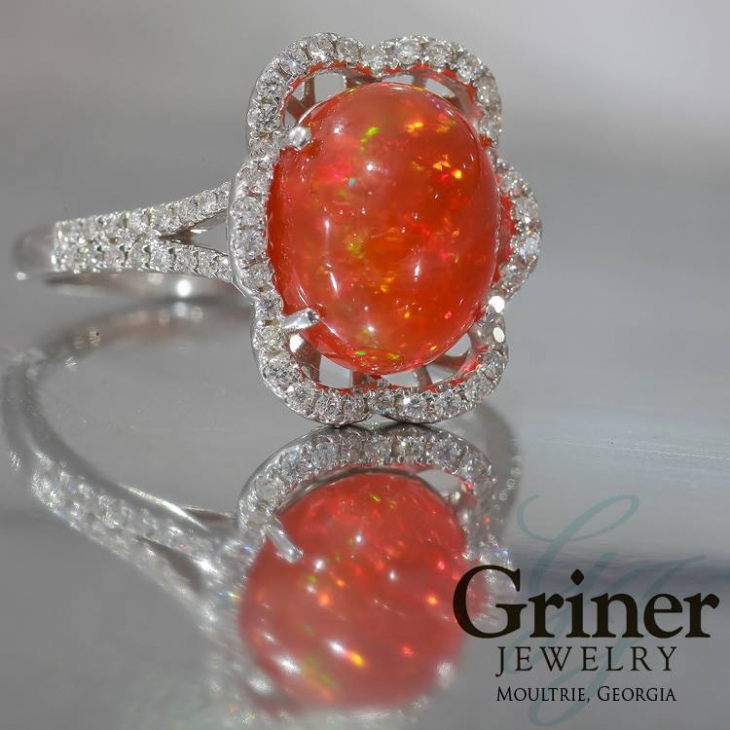 Fire opals are formed in Mexico's ancient volcanos, mostly in and around the central Mexican state of Queretaro. It forms when water seeps into silica-rich lava, filling seams and hollows. First discovered in 1835, fire opals were so plentiful that miners of the time described how they were sold by the sackful. To this day, it is not uncommon for farmers of this region to till up gemstones.

Griner Jewelry has a beautiful selection of fire opals, topaz and many other gemstone peices. Our showroom is located at 30 First Ave SE Moultrie, GA 31768, or you can call us at 229-985-3700.